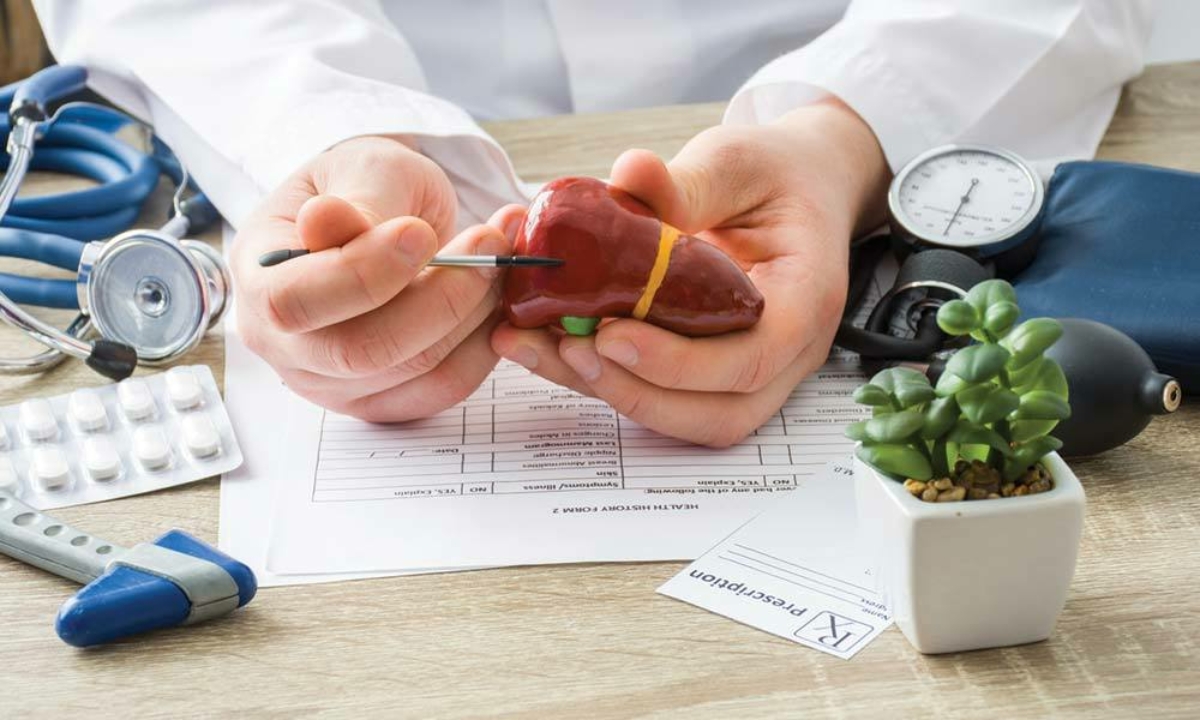 Your gallbladder may not be an organ you know well, but this tiny, pear-shaped organ performs a very important service. The gallbladder stores and concentrates bile that allows you to digest fats. Composed mainly of cholesterol, bile salts, and bilirubin, bile is a compound produced by the liver and stored in the gallbladder until your body needs it. After your food is partially digested in the stomach, it enters the small intestine. Bile is released into the small intestine by the gallbladder to help break down fats in your food.

When everything is functioning normally, you would never know your gallbladder is doing its job. However, when the flow of bile gets blocked, things start to go downhill quickly. Gallstones are deposits that develop when the components of bile, such as bilirubin and cholesterol, stay in the gallbladder and solidify into hard, pebble-like masses. These deposits may be solid masses or may only be a thick, viscous sludge. As many as 80% of gallstones do not cause symptoms, but the rest are not easily ignored.

When these gallstones lodge in the bile ducts and block the release of bile, a backup of bile can result. Obstructions in the bile ducts may cause your gallbladder to swell and will likely cause intense pain and tenderness on the right side of the abdomen. You may also have back pain, known as biliary colic. If the blockage is not cleared, your gallbladder can become inflamed. You may also be at risk for infection and lack of blood flow (known as ischemia). This condition is known either as acute cholecystitis or acute calculous cholecystitis (ACC) depending on the specific cause. If you experience repeated episodes of acute cholecystitis your gallbladder may become damaged, resulting in chronic cholecystitis. This shrinking and thickening of the gallbladder wall may result in an inability to store bile and increase the likelihood of blockages.

For most people, a gallbladder attack will last one to four days and then subside. If your attack is particularly severe, the wall of your gallbladder may rupture or perforate. When this happens, surgery will likely be necessary. It is also possible for pus to build up inside the gallbladder in a condition called empyema. It is also not uncommon to develop a bacterial infection before or even during a gallbladder attack.

Most of the symptoms of cholecystitis are similar to other conditions such as pancreatitis. If you are having a gallbladder attack, you will nearly always experience intense pain, though symptoms of cholecystitis vary from person to person. Upper abdominal pain, especially in the right upper quadrant, is the most common complaint. With acute calculous cholecystitis, the pain often intense and comes on suddenly. It is usually described as cramping, dull, or steady. The pain of an ACC gallbladder attack can become incapacitating. The pain of a gallbladder attack usually lasts more than six hours. It will often begin at night or a few hours following a meal. Pain from a gallbladder attack may worsen with a deep breath and can radiate into the right shoulder blade or the upper back. You may also experience dark urine, and clay-colored stools if the attack persists. Jaundice is also possible, which is typically first seen as a yellowing of the whites of the eyes.

In addition to pain, you may also experience nausea, vomiting, and the pain may cause shortness of breath when inhaling. A stiffening of the muscles of the abdomen may also occur, as well as bloating, chills, and fever. If you are an older individual, you may not develop pain or a fever. You will likely still experience tenderness in the upper right side of your abdomen, decreased food intake, and may even experience altered mental state.

Acute acalculous cholecystitis (AAC) is a bit of a different story. This gallbladder disease occurs in the absence of gallstones or any blockage of the cystic ducts. Less than 15% of cholecystitis cases are acalculous. Typically they occur in hospitalized patients who are already suffering from other maladies. The specific causes of acalculous cholecystitis are not well known. It is commonly associated with an increased mortality rate, which is due in large part because it occurs in people who are already experiencing severe medical conditions.

In addition to the standard symptoms of a gallbladder attack, if you have ACC you may have an increased white blood cell count (leukocytosis), decreased muscle contraction in your intestines, gallbladder abscess, and possibly even gangrene. Other, less specific symptoms include diarrhea, fatigue, upset stomach, and jaundice.

A brief blockage that clears on its own may result in short term pain. If the blockage lasts longer than a few hours, inflammation of the gallbladder and surrounding tissue may result. Inflammation will cause the gallbladder to become enlarged, stiff have thickened walls and may exude pericholecystic fluid. If your attack is this severe, secondary infections are likely. These can be quite serious and result in gangrene, necrosis, or gas building up in the wall of the gallbladder. At this stage, you may be at risk for perforation or rupture of the gallbladder if you do not receive medical treatment.

AAC is not caused by gallstones blocking the cystic duct. Instead, an underlying condition or clinical trauma is responsible. This can include end-stage renal disease, major burns, surgery, polytrauma, post-hemorrhagic shock resuscitation, or systemic inflammation produced by leukemia. Viral, parasitic, bacterial, and infectious diseases are also potential causes of AAC. The exact cause of AAC is not known, but it is suspected that reduced blood flow to the gallbladder or biliary stasis (bile immobility) caused by not eating may contribute.

AAC can also be caused by infections that kill gallbladder tissue. Other medical conditions such as vasculitis (inflammation of blood vessels), diabetes mellitus, opioid addiction, sickle cell anemia, dehydration, and cystic artery obstruction can all damage the gallbladder.

How is Cholecystitis Diagnosed and Evaluated?

Unlike many other conditions and diseases, acute cholecystitis does not have one specific test that provides for a conclusive diagnosis. Instead, abdominal ultrasound and being admitted to the hospital for observation is the best way for your doctor to reach a diagnosis. If your symptoms suggest you may be suffering from a gallbladder attack, he or she will perform a physical examination. This can include probing for the gallbladder just below the ribs to see if it is painful to the touch. Typically your doctor will be looking for local signs or symptoms, systemic signs, and a result from an imaging test to confirm a diagnosis. Your doctor will also likely order a blood test to see if you have elevated levels of white blood cells or elevated C-reactive protein levels that may signal an infection or inflammation.

Directly observing gallstones, thickening in the gallbladder wall, or a blockage of your cystic duct are all possible using the right imaging techniques. In addition to x-rays, two imaging techniques commonly used if you have cholecystitis are hepatobiliary scintigraphy (HIDA scan) and abdominal ultrasound. Abdominal ultrasound is often the first test tried as it is more commonly available, is not invasive and has a high accuracy in identifying gallbladder stones. Ultrasound can also show gallbladder wall thickening and the presence of pericholecystic fluid.

A hepatobiliary iminodiacetic acid (HIDA) scan can track the flow of bile from the liver all the way through to the small intestine. Since these scans show the entire path bile follows, they are useful in showing any blockage. If your doctor orders this test, you will receive an injection of HIDA, a radioactively labeled compound that will end up in your bile. A specialized camera then traces the movement of bile by looking for this fluid. This test has limitations, though, and carries the risk of exposing you to radiation. It can also be inaccurate if you have elevated bilirubin levels which will prevent the liver from secreting compounds like HIDA into your bile.

Blood tests are part of nearly every medical diagnosis, and gallbladder attacks are no exception. Your doctor will be looking for an increase in white blood cell count and C-reactive protein which can be an indicator of inflammation. If your serum amylase levels are higher than normal, you may also have gallstone pancreatitis or gangrenous cholecystitis.

How is Cholecystitis Treated?

If you are admitted to the hospital with suspected cholecystitis, you will likely be prevented from eating or drinking anything until it is determined whether or not you will need surgery. If your doctor suspects your case does not need immediate surgery, you will likely be prevented from eating for a period of time while you receive hydration and pain medication via an intravenous solution of fluids and electrolytes.

The most common treatment for a severe gallbladder attack is a cholecystectomy—the removal of your gallbladder. It is possible to simply remove the gallstones, though there is a high rate of recurrence of symptoms within a few years. For this reason, your surgeon will likely suggest removing the entire gallbladder. Gallbladder removal is typically done via laparoscopic cholecystectomy. During this procedure, a thin, flexible tube known as a laparoscope is inserted through a small incision in the abdomen, allowing your surgeon to inspect and remove the diseased tissue.

If you are older, have other systemic dysfunction, have an autoimmune deficiency, or other significant risk factors, your doctor may be reluctant to perform a cholecystectomy due to potential complications. In these cases, a cholecystostomy drainage tube can be placed in your gallbladder to help ensure proper drainage in the future.

Talk to Your Doctor

Any time you experience severe pain in your abdomen, particularly if it is accompanied by dark-colored urine, fever, vomiting, and yellowing of the whites of the eyes, you should seek medical attention immediately. A gallbladder attack, especially one that is severe and lasts more than a few hours may be severe enough for the gallbladder to rupture. This can put you at risk of a generalized infection in your abdomen that can be difficult to treat, and could even prove to be lethal. If you have experienced mild gallbladder attacks that clear up on their own, you may be at risk of developing chronic cholecystitis. It is better to catch gallbladder damage early rather than risk needing to have it removed later.

Make an appointment today with Cary Gastroenterology Associates. We can help you understand your symptoms, and know more about the risks posed by cholecystitis. Knowing the warning signs, understanding treatment options can help you make better decisions about how to care for your body.