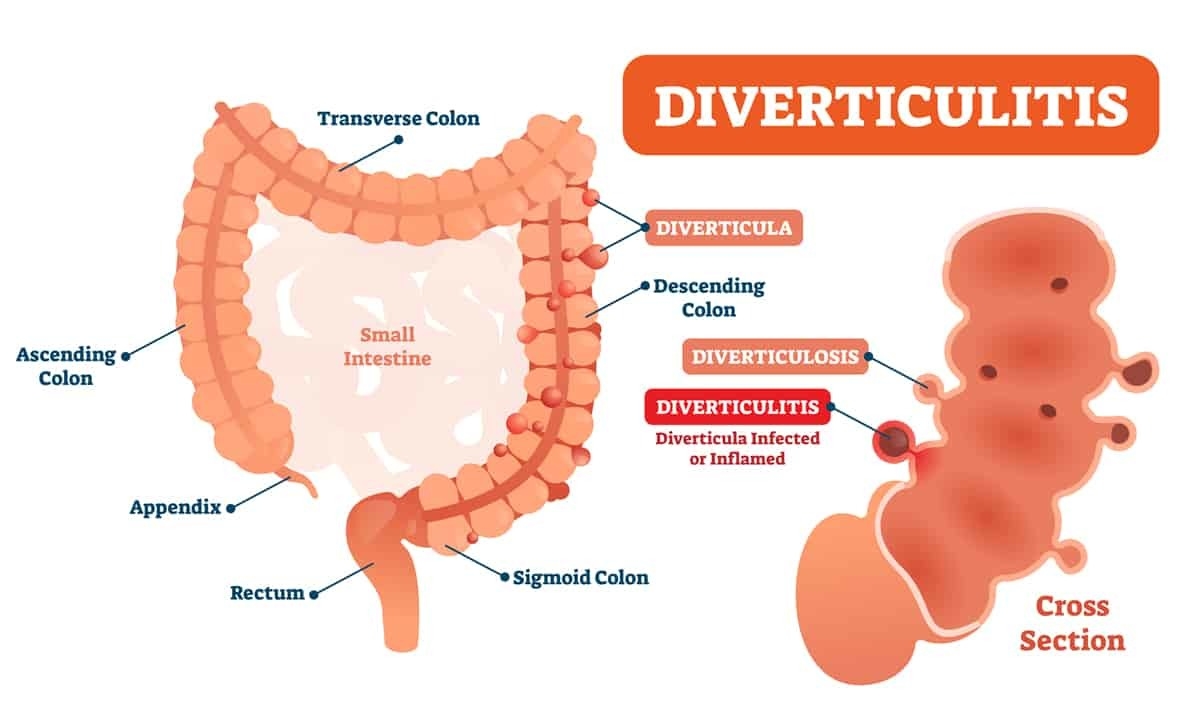 Diverticulitis, while a relatively rare condition, is nevertheless the cause of hospitalization for approximately 200,000 people per year in the United States. This unpleasant gastrointestinal disease is still somewhat of a mystery to doctors, but new research indicates a strong connection between the disease and one’s regular diet. It is for this reason that new advice has emerged in terms of the kinds of foods that lead to a healthier colon and a lower chance of diverticulitis.

Facts About the Colon

Since diverticulitis is primarily a disease of the colon, it’s helpful to understand the structure and function of the colon. Also referred to as the large intestine, the colon is a U-shaped tube that forms the part of the digestive system between the small intestine and the rectum. After being subjected to digestive juices and peristaltic forces in the stomach, food enters the small intestine where special enzymes allow nutrients to be absorbed into the bloodstream. The remaining waste products move into the colon where water is absorbed and feces are formed before passing through the rectum.

In a normal, healthy person, the wall of the colon is composed of several layers of tissue including muscle and the mucosa, an inner membrane that interacts with the waste materials that pass through. These tissues work together to form solid fecal matter, absorb water, and push the feces through to the rectum. Although the colon doesn’t play a significant role in actual digestion, the gut flora that reside in the colon do participate in further breaking down food that hasn’t been fully digested by the small intestine.

Diverticulosis is a relatively common condition in the United States and other Western countries, especially as people get older. While extremely rare for people who are 40 years old or younger, it is estimated that around half of people over the age of 60 develop diverticulosis; it is even more common for those who are older than 80. The good news is that for the majority of people, diverticulosis is harmless and rarely causes symptoms.

Some newer research suggests that around 5% of those with diverticulosis will eventually develop diverticulitis. Sometimes referred to more specifically as colonic diverticulitis, diverticulitis is a condition where the diverticula become infected and subsequently inflamed. Diverticulitis symptoms can include abdominal pain or tenderness, nausea, vomiting, fever, constipation, bloating, and, in rarer cases, diarrhea. Diverticulitis often comes on quickly and unexpectedly, and can cause a variety of complications:

The precise cause of diverticulosis and, by extension, diverticulitis, is still unclear to doctors. While there appears to be a relationship between getting older and developing the disease, age alone doesn’t fully explain the onset. Curiously, diverticulosis is relatively uncommon in non-Western regions of the world where the amount of fiber in local diets are much more likely to be higher, particularly in the form of fruits, vegetables, and grains.

It is because of this correlation between the typical Western diet and the development of diverticula in the colon that has led most doctors to the conclusion that a low fiber diet is at least part of the underlying cause. In general, low-fiber diets tend to bring about constipation since a lack of bulk-forming fiber doesn’t assist in the movement of fecal matter through the colon. Once constipated, increased bowel pressure tends to promote straining during defecation; it is this combination of pressure and straining over time that is believed to cause diverticular disease.

Prior to the kind of infection that leads to diverticulitis, there isn’t generally a treatment for diverticular disease. Though the diverticula won’t go away by themselves, they typically don’t cause symptoms or need to be treated. It is only when an infection begins that treatment is necessary, and that can include antibiotics or a low-fiber diet (to reduce the frequency of bowel movements); surgery may also be necessary for more severe cases.

In addition to preventing the recurrence of infection, a modified diet may actually help also prevent the diverticula from forming in the first place. As alluded to earlier, some recent studies have indicated that moving away from a typical Western diet may be instrumental in combating diverticulitis. With that in mind, below are some different foods that should be added to your diet or avoided.

In general, a high-fiber diet is beneficial and associated with a lower risk of diverticulitis. The Department of Health and Human Services recommends a fiber intake of 25-30 grams per day for most age groups. Some foods that are known to be good sources of fiber include:

For a person that is currently in the midst of a “flare up” of diverticulitis, switching to a low-fiber diet or a clear liquid diet is crucial. Once the flare up has passed, a diet high in fiber-rich foods is important, but there are also some foods that should be avoided in order to have the best chance of preventing future inflammation:

In the past, doctors routinely recommended avoiding a variety of foods for those with diverticular disease; nuts, seeds, and popcorn were often first on the list of foods to avoid. In recent years, however, most doctors now believe that it may not be necessary to avoid nuts and seeds in order to prevent a flare up.

For those with diverticular disease or diverticulitis, as well as with many other gastrointestinal diseases and disorders, what you eat can have a major effect on preventing problems. Research continues to show that dietary fiber may very well be the key to preventing diverticular disease.  If you have experienced any of the symptoms of a diverticulitis flare up, or if you would like to talk with a gastroenterologist about your digestive health in general, contact Cary Gastroenterology Associates today to make an appointment