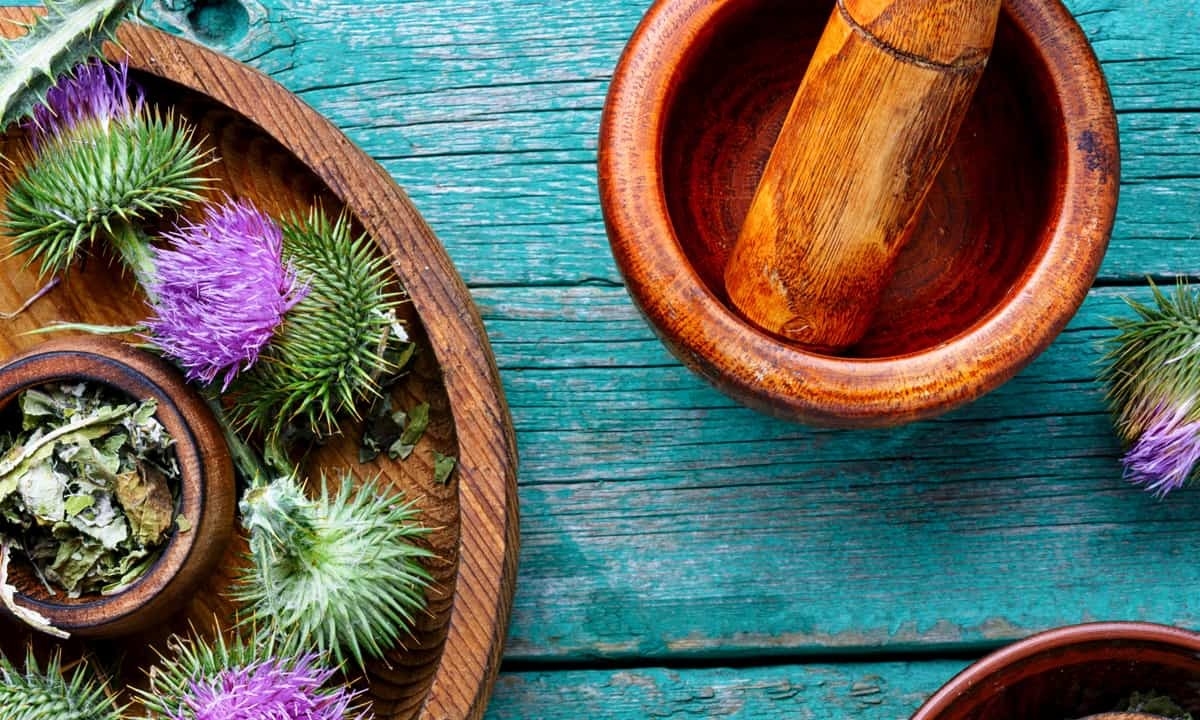 Since the dawn of time, humans have tried to find cures for what ails us. Long before the advent of modern medicine, herbs, spices, and other natural remedies were the only options for treating many diseases.

During the rise of modern, evidence-based medicine, many of these traditional remedies fell out of favor with physicians. Now, as many people begin to look for alternatives to modern drug therapy, these natural medicines are making a comeback. To the surprise of some, it turns out there may be merit to some traditional cures.

Some traditional treatments have proven to be ineffectual while others have stood up to the test of rigorous scientific study. There are also herbal remedies that simply haven't been studied enough to know whether or not they have any significant effect. In this last group is a plant called milk thistle that has been used by people for thousands of years.

What Is Milk Thistle?

Silybum marianum, or milk thistle, is a relative of the daisy and ragweed that has been used as a treatment for a wide variety of illnesses since antiquity. It is thought to have benefits for everything from preventing liver disease to fending off Alzheimer's disease to improving bone health.

Today, most people will encounter this remedy in the processed form of milk thistle extract, which contains high amounts of silymarin, the active ingredient thought to bring about the various health benefits attributed to milk thistle.

Despite the broad claims attributed to this supposedly useful plant, there have been relatively few clinical studies done to scientifically verify the benefits of milk thistle. For this reason, you should talk with your doctor before you start taking silymarin. This is particularly true if you are already being treated for a major health condition such as severe liver problems or cancer. Natural remedies such as milk thistle can sometimes have a reaction to other medications you may be taking, which could worsen your condition rather than solving it.

What Is Milk Thistle Used For?

The list of benefits of milk thistle is surprisingly long. Improving liver function is high on the list, both in preventing damage to the liver and helping heal from the effects of liver disease. Some studies have suggested milk thistle extract can help heal liver cells damaged by hepatitis C and alcoholic liver disease. It is also supposed that silymarin can be used to prevent liver damage from mushroom poisoning.

Historically, milk thistle was believed to increase production of breast milk. It is suspected that use of milk thistle extract could increase the milk-producing hormone prolactin. This is an area where it is important to point out that extreme care should be exercised. If you are pregnant or breastfeeding, you should consult with your doctor before taking milk thistle. There has not yet been conclusive research on how safe this natural medicine may be for your child.

There are many other illnesses and ailments that milk thistle may provide benefits for, though research is lacking when it comes to conclusively proving a significant benefit. Some studies suggest acne may be related to oxidative stress on the body, which could mean silymarin may provide a benefit as an antioxidant. Along the same lines, there are indications oxidative stress could be a contributing factor of degenerative neurological conditions like Alzheimer’s disease. In both of these scenarios, and several others, there is still research needed to prove that the positive effect attributed to milk thistle extract is real.

One area where milk thistle gets attention as a possible treatment is in cancer prevention. With any disease that has a possibility of being terminal and treatment options are limited, people can be tempted to try anything that might work. Silymarin has shown some promise in helping your body respond better to chemotherapy as well as reducing the severity of side effects from other cancer treatments.

How Does Milk Thistle Work?

Milk thistle, sometimes known as holy thistle or mary thistle, contains a combination of silibinin, silicristin, and silidianin. Together, these chemicals form the compound known as silymarin. This compound is one of a family of chemicals known as flavonoids, which are known to have several beneficial properties for the body.

Silymarin functions as an anti-inflammatory agent. It is also known to have antioxidant properties that can help the body fight the damage caused by free radicals. More research is needed, but it is believed that silymarin works as an antioxidant, which helps the body heal itself more effectively. It is also possible that your body may react more quickly to other medications and treatments when they are paired with milk thistle extract, though you should definitely consult your doctor first if you are undergoing treatment for a serious condition like liver disease or cancer.

Milk thistle extract may help reduce or prevent the damage caused by osteoporosis. This disease, which results in a loss of bone density over time, can lead to severe skeletal damage and other complications if left untreated. Silymarin has been shown to promote bone remineralization in some animal studies, which could indicate that it may be useful in helping ward off the negative effects of osteoporosis in humans as well.

Though traditional medicines often have a long history of being suspected to have positive effects, it is best to talk to your doctor before taking any herbal supplements, especially if you are already being treated for a known health condition. Negative reactions with other drugs you may be taking is a real possibility.

It is also important to note that no drug or treatment can completely prevent the effects of an unhealthy lifestyle. Managing your diet, getting exercise, avoiding excess alcohol consumption, and other healthy living habits will go further to keeping you healthy than taking drugs or supplements.

On the plus side, taking milk thistle extract is rarely noted to have significant side effects. The exception to this is if you are a person who is allergic to ragweed. Aside from a possible allergic reaction, diarrhea, bloating, and gassiness are the most common side effects from taking silymarin. For this reason, milk thistle is an attractive option to people who are afraid of taking drugs with a long list of potential negative side effects.

Is Milk Thistle Good for the Liver?

Probably the most significant evidence, both historically and scientifically, favoring the positive benefits of milk thistle, is in the area of liver health. There are suggestions that taking milk thistle could help with everything from non-alcoholic fatty liver disease (NAFLD) to protecting against damage from chemicals in poisonous death cap mushrooms. There is limited evidence that some people suffering from cirrhosis of the liver experienced improved outcomes when taking silymarin.

It is best to think of milk thistle as a complementary therapy rather than a cure in and of itself. Taking silymarin on its own is not enough to prevent liver damage from severe alcoholism or other conditions, nor is it likely to reverse significant damage already done to the body. Taking it alongside other therapies, and under the advisement of your doctor, may provide improved outcomes, though.

If you have Type 2 diabetes, you may be encouraged to hear that lowering blood sugar levels is one of the benefits of milk thistle that has the strongest clinical proof. More research is needed, but there is also evidence silymarin can help lower your blood sugar.

For individuals struggling with insulin resistance, there is potential that silymarin could help. The severity of your diabetes will dictate to a large degree how aggressive your treatment program needs to be, but for some people it may be worth looking into remedies like milk thistle to see if they can help manage your diabetes.

How Safe is Milk Thistle?

Like all natural remedies, there is a balance to strike between how effective a natural medicine may be and any potential dangers taking it may present. Very few people experience serious side effects of taking milk thistle. Diarrhea, bloating, and other mild gastrointestinal distress are likely to be your most severe side effects.

Similarly, women who have a diagnosed or suspected history of certain health conditions should be very cautious about taking milk thistle. Since silymarin has a known estrogenic effect; if you have been diagnosed with endometriosis, fibroid tumors, breast cancer, uterine, or ovarian cancer, you should avoid milk thistle. The bottom line is that the internet and the world at large, is full of advice. Not all of it is well-founded, and it can be hard to sort through it all on your own. If you are experiencing liver or other problems that require treatment and are seriously considering taking milk thistle, consult with your doctor first. At Cary Gastroenterology Associates, we can help you understand the possible effects silymarin and other natural remedies may have on you. Knowing the possible benefits and risks is important before taking any drug or supplement, and milk thistle is no different. If you are curious about whether this natural remedy could be helpful for you, especially if you have already been diagnosed with liver disease, request an appointment today.