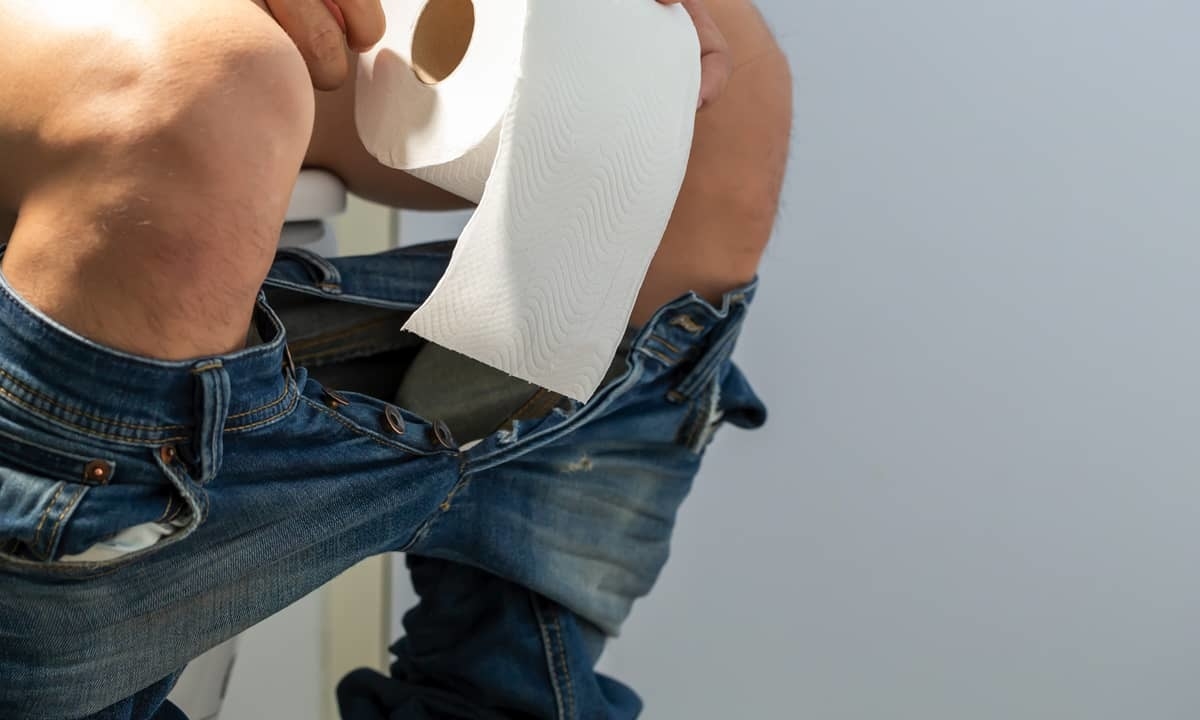 Postprandial diarrhea may sound a bit unpleasant, but that bland medical name can undersell the true power of what can happen to you after you eat something that doesn’t agree with you. Explosive diarrhea may be a better term for the alarming evacuation your bowels can perform when something goes seriously wrong in your digestive tract.

It may sound a bit dramatic to use the word “explosive” to describe anything the body does, but for those who have experienced the undeniable urge of postprandial diarrhea, there is no other word for it. Though we most often attribute violent bowel movements to eating contaminated food, there are several common causes of loose stool besides food poisoning that can send you sprinting for the nearest toilet.

Simply put, rapid defecation after you eat is caused when an irritant or biological process of some kind disrupts your normal process of digestion. These unsettling events could be caused by external factors like viruses or bacteria, or could be due to diseases and food allergies. Whatever the trigger, the net effect is the same; food that would normally be digested over a longer period of time is rushed along out of your digestive tract.

Your partially digested stool contains more water than you normally see in a healthy bowel movement. When you are digesting food, electrolytes, bile acid, and electrolytes are added to your food to help aid in digestion, making your stool almost 75% water at certain points in digestion. Much of this liquid content is reabsorbed by the large intestine during normal digestion. When you have watery stools, digestion is sped up or too much fluid is added to your stool, preventing that liquid from being reabsorbed. What happens in these cases needs little further explanation.

The specific causes of diarrhea are quite varied. We will look at these causes in greater detail below, but a quick list of the common causes includes:

Giardia lamblia and cryptosporidium are two of the most common culprits responsible for parasitic diarrhea. Though typically striking individuals with weakened immune systems, these water-borne parasites can be encountered throughout the world, and the results of an infection can be dramatic. The diarrhea from a giardia infection can be quite serious and long lasting, and could result in death from dehydration or electrolyte loss if not treated properly.

Diarrhea from Bacterial or Viral Infection

Parasites may be lurking in contaminated water, but the bacteria waiting in our food or viruses found on contaminated surfaces can have a profound effect on your digestion. Bacteria such as salmonella or E. coli are some of the most common contaminants found in food. For viruses, rotavirus, viral gastroenteritis, and the norovirus are among the most common types of illnesses. Many of these viruses are typically lumped under the heading of the “stomach flu” even though they are not strictly related to influenza.

Your digestive system is a delicate and complex set of organs, and many different things can and do go wrong. Crohn’s disease and irritable bowel syndrome are two of the most common forms of intestinal disease that can result in gastric troubles, including acute diarrhea. Ulcerative colitis is also on the list of possible causes of diarrhea that can be linked to the function of your digestive system rather than an outside cause.

Inflammatory bowel disease is a condition that could either be classified as a bowel disease or an allergy. This condition is caused by an out of control reaction by your immune system.

We often describe bouts of watery stools as eating something that “didn’t agree with you.” In the case of food allergies, this is a rather accurate description. For those suffering from food allergies, food intolerance can manifest in several different ways. This could include abdominal pain, cramping, bloating, and even diarrhea.

Gluten intolerance and an inability to properly digest dairy products are two commonly cited food allergies. Lactose intolerance is due to a lack of lactase production in your intestines rather than a reaction of the immune system that makes up a true allergy. Celiac disease, on the other hand, is an allergic reaction where the lining of your intestine becomes inflamed when you introduce gluten into your diet.

Though not as common as other causes of diarrhea, some artificial sweeteners can loosen your stool. Food additives like sorbitol can lead to a condition known as osmotic diarrhea where water is drawn into the intestines as your body tries to metabolize the sweeteners in your food. Fructose is another sweetener that can trigger malabsorption, which leads to a higher water content in your poop.

Does IBS Cause Explosive Diarrhea?

There is conflicting evidence whether irritable bowel syndrome (IBS) directly causes explosive diarrhea. Though some researchers have suggested a link in a condition known as “postprandial diarrhea syndrome,” it is likely there are other factors at play in these scenarios such as bile acid malabsorption or pancreatic exocrine insufficiency.

For people who have undergone weight loss surgery, there is another potential cause of explosive diarrhea to be aware of. In addition to food poisoning or food allergies, dumping is a condition where your new, re-routed digestive tract becomes upset with the quantity or quality of food you are eating. This scenario can be very dangerous for post-operative bariatric surgery patients, and you may require medical attention. Gastric bypass surgery leaves you with extreme caloric restrictions, as well as making it hard to get enough liquids in your system. If dumping becomes serious enough, you will not only be missing out on critical nutrients, but you risk losing electrolytes that help keep your body functioning properly.

Taking Care of Your Digestive Health

Throughout your life, and especially as you age, maintaining proper gut health is incredibly important. While it may be uncomfortable and potentially embarrassing to fight through a few bouts of loose stool, loose stools could be a sign of several different serious health conditions.

You may not want to have anything to do with your poop, but at Cary Gastroenterology, we know that the condition of your stool can be a powerful indicator of what is going on inside your digestive tract. A few episodes of watery stools may be nothing to worry about, but chronic diarrhea is no laughing matter. Untreated watery stool can be life-threatening in its own right, and it could be a sign of serious, deadly diseases such as colorectal cancer. If you have concerns about postprandial diarrhea, or any other element of your digestive health, it is better not to wait. Request an appointment with Cary Gastroenterology today.