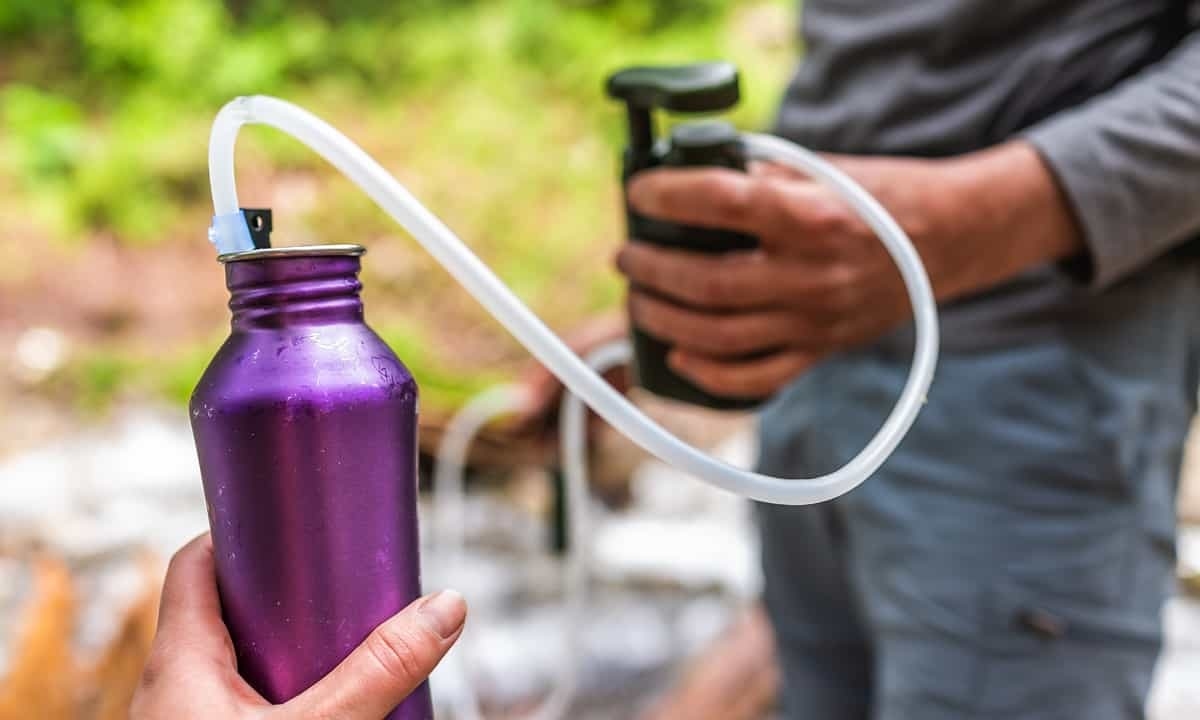 It is another blistering hot June day in the canyons of Southern Utah. You are days away from medical help and suddenly you realize something is wrong in your digestive system. After feeling feverish for a couple days, you begin having watery diarrhea that won’t stop. Dehydration can be lethal in the desert, and now you are at a greater risk because of your diarrhea. How are you going to get back to civilization, and where did this illness come from in the first place?

If this sounds like a recipe for backcountry disaster, you are right. This very real story ended well, but there was real cause for concern. The symptoms described were caused by an infection of Giardia lamblia. This tiny parasite is one of the most common causes of waterborne illness in the United States, and it can be found everywhere from the most remote backwoods streams to your local swimming pool.

Giardia lamblia, also known as Giardia intestinalis, is a parasite common to bodies of water of all kinds throughout the United States and around the world. This parasite attacks the small intestine, causing a host of unpleasant symptoms. Giardia can be spread through contaminated drinking water, or by encountering fecal matter from a person or animal that is infected with the disease.

An infection of Giardia lamblia, known as giardiasis, is not typically deadly in industrialized countries. Giardia infections can be quite dangerous in developing countries, and children can be at particular risk. Dehydration from fluid loss caused by watery diarrhea is generally the most dangerous symptom of giardiasis.

What are the Causes of Giardiasis?

Giardiasis is caused by ingesting the Giardia lamblia parasite. This microscopic parasite exists in the intestines of people, dogs, deer, cattle, beavers, and other animals. Unlike many other parasites that require you to have direct contact with infected people to become ill, G. lamblia can release spores encased in protective cysts. Inside these cysts, Giardia can live for weeks or months in water sources or on surfaces. Once it is ingested by a new host, the protective cyst dissolves and the cycle of infection begins again.

Giardiasis can be contracted from animals in the outdoors, or even from other humans in household contexts. According to Centers for Disease Control and Prevention, giardia is typically contracted by coming into contact with fecal particles or Giardia cysts on surfaces and in contaminated water. Directly ingesting contaminated water, either through swallowing water in a pool or drinking untreated water from a stream in the wilderness, is one common source of infection. Failing to wash your hands thoroughly is also a common source of transmission.

Since giardia spores are spread through poop from an infected animal or person, extra care needs to be taken if you are in a position where you may come in contact with feces or contaminated items. It is possible for infants and young children to get giardiasis, which means parents and other caregivers who spend time changing diapers need to take particular care to limit the spread of the parasite in homes and childcare settings.

It is also possible to get giardia from eating undercooked food. Giardiasis from food is more rare than from exposure to contaminated water, as the parasite is easily killed by cooking. Despite this, it is still possible to contract giardiasis if a person handling your food is infected and is not maintaining proper hygiene.

Giardiasis is a risk for travelers, especially if they are going to a location where the parasite is present and access to clean water may not be assured. Whether it is in the backcountry in the United States or a foreign country where the water is not safe to drink, it is important to only drink safe, bottled water, or to filter, treat with iodine, or boil water for at least 10 minutes at 158 F (70 C) to ensure any giardia cysts have been destroyed.

What are the Symptoms of Giardiasis?

Dehydration due to loss of water in your stool is one of the most serious results of a giardiasis infection. Though not a symptom directly, it can be caused by the diarrhea that commonly accompanies an infection. Maintaining proper hydration is a serious concern for anyone, and can become even more important for individuals in remote wilderness environments, and for individuals who are more at risk from the effects of dehydration like the elderly and young children.

How is Giardiasis Diagnosed?

Giardiasis is diagnosed by having your doctor examine stool samples to see if cysts can be found in your poop. Unlike some other infections or gastric conditions that only require a small number of samples to verify your condition, your doctor may request several samples over a period of time. This may be necessary to confirm an infection, as well as see how effective your treatment plan is proving to be.

In some cases, your doctor may also elect to perform an endoscopy. This procedure, which involves threading a long, flexible tube down your esophagus and into your upper digestive tract, can allow your doctor to see what is going on inside you via a tiny camera attached to the end of the tube. It is also possible to retrieve tissue samples from inside your digestive tract for testing.

What are the Treatments for Giardiasis?

For many people, as unpleasant as it is, giardiasis can often be treated by simply letting the disease run its course. With careful monitoring of fluid intake to ensure dehydration doesn’t become a problem, many cases of giardiasis can be treated without any prescription medication. Thankfully, if you need a little help getting over an infection, there are several common drugs that have proven effective in eliminating giardia from your gut.

What Complications are Associated with Giardiasis?

The primary complication of a giardia infection is dehydration. Anytime you are experiencing watery diarrhea, you are at risk for severe dehydration unless you are taking measures to ensure you keep up your intake of fluids. If you contact giardia from a pool or other community setting in your local environment, it is easier to manage dehydration, as you may have more ready access to medical treatment. When people, especially children, contract giardiasis in remote locations or in countries with less access to medical care, concerns about dehydration can be more significant.

The disruption to the bacteria in your small intestine caused by giardiasis can lead to some unexpected complications. One of these is temporary lactose intolerance. Many people who could tolerate dairy before an infection report an inability to digest dairy products. This condition can last long after the symptoms of giardiasis have resolved.

A serious complication for children who contract giardiasis can be a failure to thrive during and after a giardia infection. If symptoms are severe enough, and last for a long time, malnutrition is possible. This can lead to further issues with physical and mental development. If a child experiences repeated infections, or one that has recurring symptoms, this can be particularly problematic.

How Can I Prevent Giardiasis?

Since there is no vaccine or medicine to prevent a giardia infection before it happens, the only way to stay safe is to avoid exposure to giardia cysts in the first place. Thankfully, most of the best ways to protect yourself are common sense practices you should be doing anyway.

Wash Your Hands
As disgusting as it is to think about, giardia is only shed from the body through feces, and to become infected, you have to ingest it somehow. One of the most common forms of transmission is via your hands. Proper hand washing before eating or preparing food is essential in preventing an infection, especially if you have been using the toilet or changing diapers.

Consider Using Bottled Water
Single-use plastics like water bottles can cause problems if they are not properly recycled or disposed of. Despite this, there are times and places where your health could depend on drinking from a clean source of water. Drinking, cooking, and even brushing your teeth with bottled water are important ways to avoid infection if you are in a location where treated water is unavailable. Avoid or use care in selecting and washing fruits and vegetables in countries where clean water is not immediately available.

Purify Any Unsafe Water Sources
It is sometimes impossible to carry enough water for a long trip in the woods. On these occasions, make sure you either purify your water by filtering thoroughly, or by boiling water long enough to kill any potentially harmful bacteria and parasites that may be in the water. The exact length of time you need to boil your water depends on how hot you can get the water, the altitude, and what parasites and bacteria you are trying to kill.

Keep Your Mouth Closed
Ingesting water from contaminated sources can have the same effect whether you drink it on purpose or gulp it down by accident while swimming. Being careful not to ingest water when swimming in pools, lakes, or streams can help lower your risk of developing giardiasis.

What is the Long-Term Outlook for People with Giardiasis?

Giardiasis is not considered a terminal or chronic condition, and most people who develop giardiasis will find their symptoms resolve on their own in time. Your infection will not likely clear up overnight, though. A giardia infection can last up to six or eight weeks, and some complications such as lactose intolerance can linger long after the symptoms of your infection have disappeared.

For most people, a single infection will clear up without treatment, leaving nothing but a bad memory. It is possible, though, that infections can persist and may need medical intervention for you to begin the healing process. In some cases symptoms can recur, which can lead to longer-term consequences, especially in children or others who are at risk for dehydration and malnutrition from malabsorption of nutrients.

Talking to Your Doctor about Giardiasis

Even though giardiasis can typically resolve itself without medical attention, it is likely you will see a doctor anyhow. Whenever persistent diarrhea lasts longer than a couple days, it is recommended you seek medical care to see if something serious is going on.

At Cary Gastroenterology Associates, we have years of experience dealing with things that can go wrong in your digestive tract, whether they are common parasites or more serious illnesses. If you think you may be experiencing the symptoms of a giardiasis infection, make an appointment today. There are many gastrointestinal conditions that share symptoms, and watery diarrhea, abdominal pain, and cramping can be signs of serious diseases and infections. It is better to be safe than sorry, especially when your health is on the line.