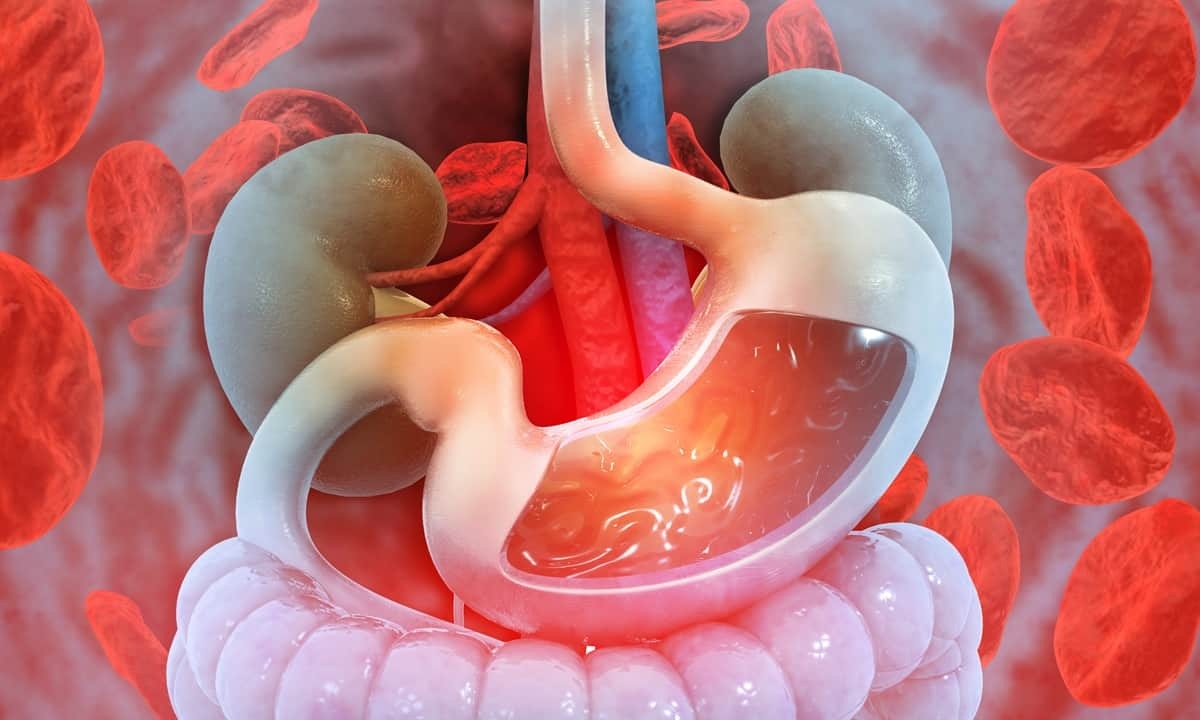 Sooner or later, everyone will have a gastrointestinal problem of some kind. Along with genetics, what we eat, what we drink, and how much physical activity we get are all factors that can have an impact on the digestive process. Mild diarrhea, constipation, and indigestion are familiar symptoms that most people experience regularly and usually can deduce the cause. Gastrointestinal bleeding, on the other hand, is a less common symptom that might not be as straightforward to identify.

The gastrointestinal (GI) tract consists of the esophagus, stomach, small intestine, large intestine, rectum, and anus. Bleeding is possible at any point along the digestive tract, and the location of the bleeding can actually influence the way the symptoms manifest. For instance, the color of the blood found in stool can indicate the source of bleeding: upper GI bleeding tends to result in black, tarry stool while lower GI bleeding tends to show up as bright red blood on toilet paper. Below are some other common symptoms and signs:

Gastrointestinal bleeding can be an isolated incident related to a specific condition, and it is usually a mild concern that resolves without a major medical intervention. In rarer cases, the bleeding can be a greater concern; one example is acute upper gastrointestinal bleeding, a potentially life-threatening condition that may cause shock. In addition to blood being visible in stool or vomit, shock can cause dehydration, a drop in blood pressure, increased pulse, or even unconsciousness. If you experience any of these symptoms, seek medical care immediately.

In people with chronic gastrointestinal bleeding, the blood loss over time can lead to anemia, a condition where the body has fewer red blood cells than normal. Anemia can present as feelings of weakness and fatigue along with shortness of breath. In some cases, blood may be present in the stool without being visibly apparent; this is called occult blood and is only detectable by detailed lab analysis. This kind of chronic GI bleeding typically happens as a result of inflammation or a more substantial digestive problem.

Because the digestive tract is such a large and complex body system, there are a wide variety of possible causes of bleeding. Doctors have many methods of diagnosing the problem, including a physical examination, blood test, capsule endoscopy, and scans aided by angiography. Through these various tests and scans, a gastroenterologist can determine the cause and treatment. Below are some common causes of gastrointestinal bleeding based on the location in the GI tract:

Most cases of gastrointestinal bleeding are relatively easy to diagnose and treat, though of course the type of treatment depends on the underlying cause. In some situations, the method of diagnosis may double as the method of treatment. In a colonoscopy, for example, the doctor may see colon polyps and be able to remove them immediately with special tools mounted on the end of the scope. The doctor can also stop any bleeding by cauterizing the affected area with a heat probe or laser.

When the cause of bleeding is due to an infection or an ulcer, the best option may be medication. This is especially true for problems in the stomach as the stomach acid can exacerbate other conditions. The doctor may prescribe proton pump inhibitors that reduce the production of stomach acid and facilitate healing. In more mild cases, over-the-counter antacids and other medications can reduce inflammation or ease related symptoms.

For most people, GI bleeding is a temporary concern that will go away on its own. As noted above, chronic bleeding can lead to anemia and other complications. If left untreated, more involved treatments may be necessary, like a blood transfusion or intravenous medications or fluids. Gastrointestinal bleeding is also a much bigger concern for anyone who is already on blood-thinning medication.

If you have been experiencing gastrointestinal bleeding and you aren’t sure why, it might be time to get checked out by a gastroenterologist. At Cary Gastro, we are dedicated to providing excellent digestive health care. If you would like to speak with a member of our staff, please contact us today to request an appointment.