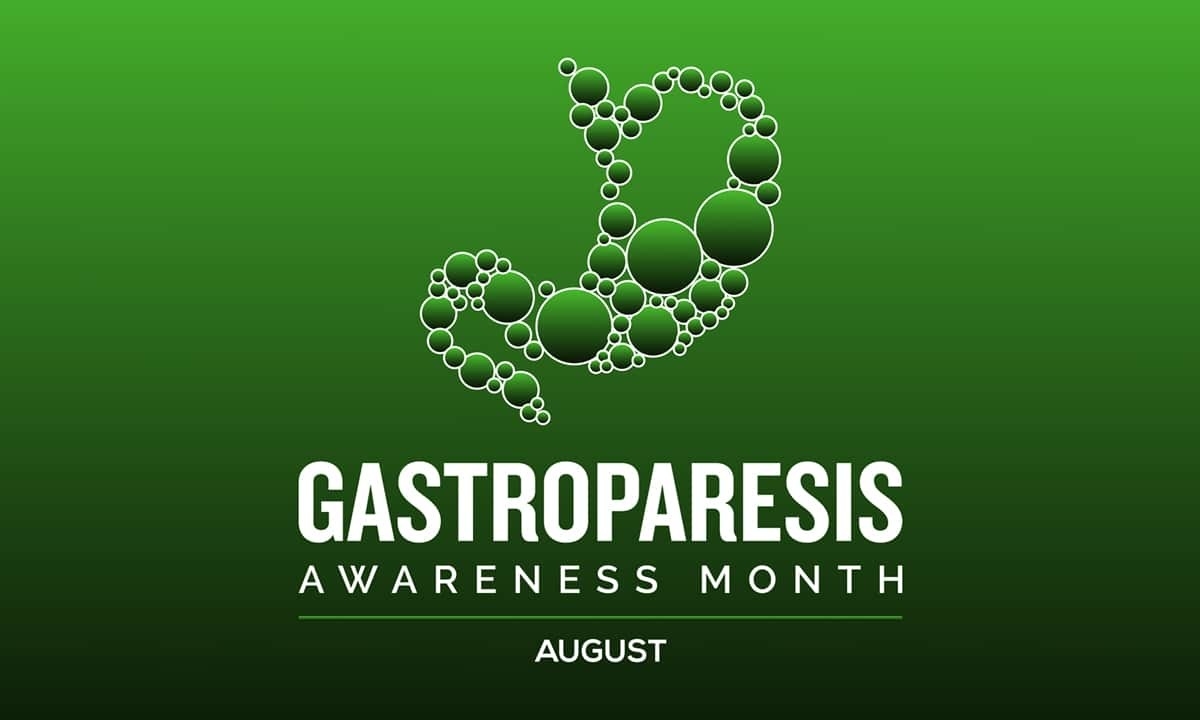 Gastrointestinal health is an often overlooked part of a person’s overall health and wellbeing, but it is an important facet of maintaining a high quality of life. Some conditions and symptoms, like diarrhea and constipation, are common and relatively easy to treat. Others, like gastroparesis, are more rare but can require a much more involved treatment regimen. Though only about 1 in 100,000 people get gastroparesis, it can cause a series of complications and symptoms. And because August is Gastroparesis Awareness Month, it’s a great time to learn more about the condition.

Gastroparesis is the medical term for a condition characterized by delayed gastric emptying; in other words, it means that the movement of food from the stomach to the intestines is slowed or stopped. When the digestive system is functioning normally, food in the stomach is broken down via exposure to stomach acid and peristalsis, a series of muscle contractions that then pushes food into the intestines.

In patients with gastroparesis, however, the stomach muscles responsible for peristalsis are too weak to work properly. As a result, the stomach takes too long to empty into the bowels, thereby delaying the entire digestive process. While this delay in and of itself isn’t necessarily harmful, the disruption to the gastrointestinal system causes the abnormal absorption of dietary nutrients; this, in turn, can lead to a variety of unpleasant symptoms, complications, and related conditions.

The delayed stomach emptying and reduced digestive motility associated with gastroparesis can have a significant impact on bowel function. Just as changes in bowel motility can lead to things like diarrhea and constipation, so also changes in stomach motility can cause a number of symptoms:

Gastroparesis is the kind of condition that doesn’t have a discreet “cause” since it can develop for numerous reasons. In fact, doctors are often unable to even determine an underlying cause, and they must instead direct treatment toward easing symptoms. Regardless of the underlying cause, however, one of the basic mechanisms that leads to delayed gastric emptying is damage to the vagus nerve, a bundle of nerve fibers that are involved with control of the lungs, heart, and the digestive system.

The stomach, like most other parts of the gastrointestinal tract, is surrounded by muscles that are responsible for moving food through the digestive process. These muscles are controlled by a network of nerves (the enteric nervous system) that communicate with the vagus nerve. When the vagus nerve (or any of the other nerves) is damaged, it can affect any body system that is connected. There are many possible reasons why damage like this can happen:

Treatment options for gastroparesis are dependent on the underlying cause of nerve damage. If the cause is diabetes, for example, the treatment will work in concert with the patient’s overall diabetic treatment; this usually means employing methods to further control blood glucose levels. There isn’t a cure for gastroparesis, so most of the treatment paths involve trying to help improve the muscles that control peristalsis or mitigating the effects of associated nutrient loss. Below are some possible methods of treatment:

The delayed gastric emptying associated with gastroparesis can cause a number of complications. In addition to the malnutrition that can happen because of reduced nutrient intake, the undigested food that remains in the stomach can actually harden into a mass known as a bezoar; these hardened masses can cause a blockage that further prevents food and nutrients to pass into the small bowel. In some cases, vomiting can be severe and frequent enough to cause dehydration. These complications, along with the various symptoms, can drastically reduce a person’s quality of life.

When Should You See a Doctor?

Since the symptoms of gastroparesis are often similar to other gastrointestinal problems, it may not be the apparent cause. If you have been experiencing severe versions of any of the symptoms, or signs of dehydration due to vomiting, you should seek advice from a qualified gastroenterologist like our dedicated physicians at Cary Gastro. Our entire team is dedicated to providing excellent digestive care. Please contact us today to request an appointment.