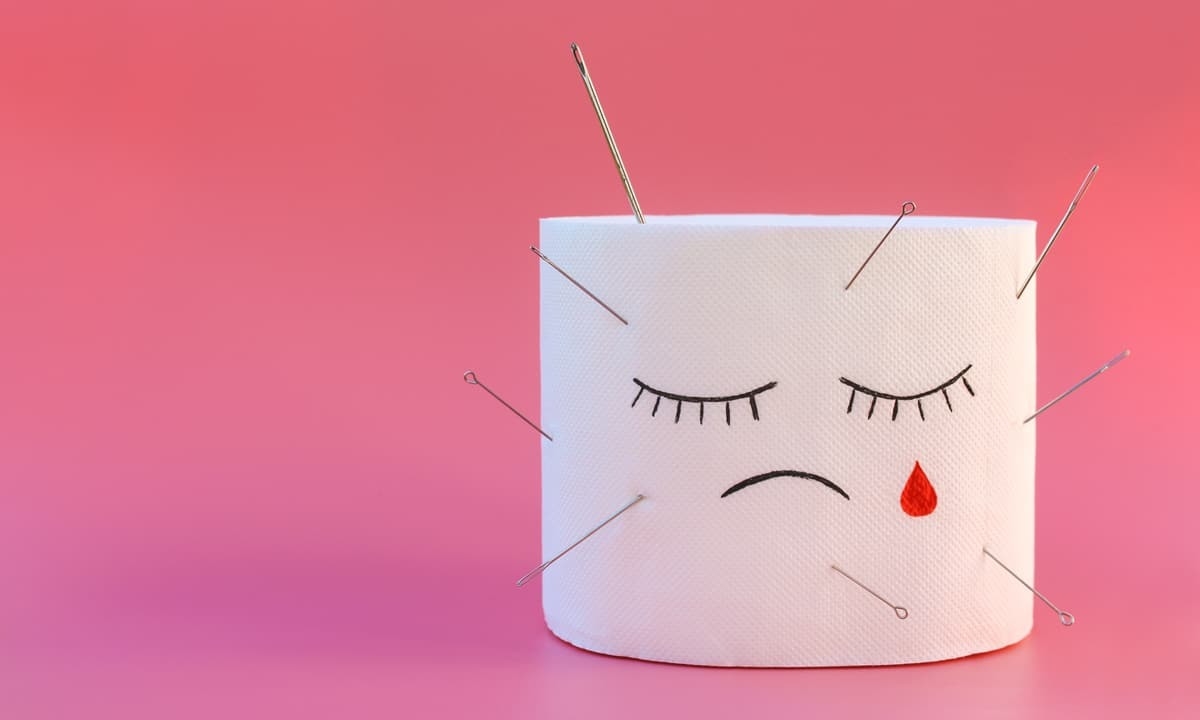 Being pregnant is wonderful and miraculous, but it is also a physically demanding experience. Pregnant women must endure and adapt to many physical and hormonal changes when carrying a child, and those changes can even affect other bodily systems that aren’t directly related to the reproductive organs. One example of this is the gastrointestinal system; in addition to things like diarrhea, constipation, nausea, gallstones, and a variety of other conditions, pregnant women are also unfortunately more likely to get hemorrhoids.

So even though everyone already has these structures as a normal part of gastrointestinal function, someone is said to “have hemorrhoids” when they have become swollen or inflamed. Regardless of the underlying cause, inflammation leads to swelling (also known as distension), and the swelling can become very painful. In addition to the direct discomfort of swelling and inflammation, the presence of hemorrhoids can make normal defecation and hygiene practices especially unpleasant. In fact, the discomfort can compel people to not clean the area well enough, and that can subsequently make the situation even worse.

Piles can be either internal or external. Internal hemorrhoids occur inside the lower rectal area and may not even present with symptoms. External hemorrhoids occur on the skin directly surrounding the anus and are responsible for most of the symptoms associated with the condition. A third type, known as thrombosed hemorrhoids, happens when too much blood collects in one of the clusters and causes a clot. The thrombosed versions often bleed along with causing notable pain, and if left untreated can leave behind a solid lump.

Hemorrhoids are fairly common in the United States, and it is estimated that around 5% of all Americans have them at any given time. Moreover, it is estimated that nearly half of adults over the age of 50 and around half of all pregnant women will develop a hemorrhoid problem. Symptoms vary depending on the person and the cause, but the following are some of the common symptoms:

What Causes Hemorrhoids in Pregnant Women?

In general, hemorrhoids can be caused by a variety of factors like straining during bowel movements, sitting on the toilet too long, the overuse of laxatives, or even lifting heavy objects. Chronic constipation and chronic diarrhea are also potential causes, mostly because of regularly straining and wiping associated with irregular bowel movements. Also, one of the reasons they affect half of people over 50 is that aging weakens the tissues and muscles that surround and support the rectum and anus.

For pregnant women, hemorrhoids tend to show up during the third trimester, when the fetus is larger and puts pressure on the pelvic floor and many of the organs of the digestive system. This pressure is especially notable on the perineum, the space between the anus and the vulva. As the fetus grows and the body prepares for childbirth, the combination of increased blood flow to the area and the pressure of the fetus’ weight can cause them to swell and become inflamed.

One of the other main causes of hemorrhoids in both pregnant women and all groups is constipation. For many people, a low-fiber diet can cause constipation and lead to hemorrhoids, but for pregnant women the answer is a little more complicated. During pregnancy, an increase in progesterone (a hormone associated with the relaxation of muscles, among other things) can cause bowel motility to slow down and lead to less frequent bowel movements, otherwise known as constipation. Once constipated, the additional straining during bowel movements and other factors can cause piles to become inflamed.

Tips for Managing Hemorrhoids During Pregnancy

Perhaps the best news about having hemorrhoids during pregnancy is that they usually improve or heal not long after the baby is born. In some cases, they can get worse or originally form postpartum as a result of pushing hard during delivery. Either way, there are numerous methods and home remedies for avoiding or easing the discomfort of hemorrhoids even while still pregnant:

Like many of the bodily changes involved in pregnancy, hemorrhoids can be related to and affected by both the reproductive system and the gastrointestinal system. Indeed, pregnancy in general often has a major impact on digestive function. It is in light of this that the Women’s Center for GI Health at Cary Gastroenterology Associates offers specialized digestive care for women that is compassionate and centered on women’s needs.

Whether or not you’re pregnant, Cary Gastro is a healthcare provider dedicated to getting you the care you need. Men and women alike can be treated for hemorrhoids via hemorrhoid banding ligation, the most effective method available. If you’d like to learn more, contact us to request an appointment.